Who are we Presbyterians?

Community Presbyterian Church was founded in the belief that communities must learn to help themselves. 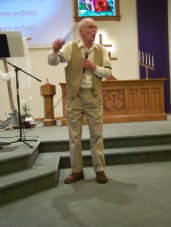 What is a Presbyterian?  An answer to that question begins in the 16th century.  It is the result of “the reformation” in effect the rebellion against Catholicism.  This rebellion took many forms through Europe and into the British Isles.  At the heart of the reformation and of the Presbyterian church are three basic beliefs.  First we are saved by Grace, second scripture is center to our life and worship and third we belong to a priesthood of believers.  It goes without saying, we believe in God as revealed by Jesus Christ.

It is our governance that sets us apart from other denominations.  Simply put, those Scots wanted nothing more to do with control from Rome.  Worship was pared down to a basic service, prayers, hymns, scripture and sermon.  Sacraments were reduced to two, baptism and communion.  Communion was served perhaps quarterly.  Clergy were disempowered left with only the authority to chose scripture and write the sermon.  The church was run by elected and ordained (by the congregation) men (now also women) who were called elders.  Hence the name of the denomination, the Greek word for elder is presbyter.

The church of England attempted to control the Presbyterians, sending bishops to supervise and direct, but they were run out of the country by a rioting mob.  Yes, Presbyterians can riot when they feel their cause is just.  Without bishops there was no hierarchy of power which left congregations with no place to turn when they get in trouble and congregations are prone to do that.  The solution was to gather churches in a geographical area into groups called presbyteries.  The churches in a presbytery supervised each other.

The characteristics of the Presbyterian Church evolved gradually over a period of time, but the description above describes how we still are in the twenty-first century.

We're here to welcome you. For non-emergencies, please drop by during these hours: